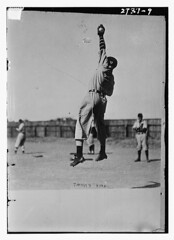 photo credit: The Library of Congress

I recently attended three major events. The first was the education retreat for SITE Chicago in St. Kitts, NBWI. The second was the annual National Speakers Association in Atlanta, and the third was the Gaming Marketing Expo in Las Vegas.

In each case the mood was electric. Adrenaline ran high and every person at each event arrived with the expectations that their time spent would be fruitful. What differentiated these events was the execution.

The first, St. Kitts had two people, my communication director Alicia and myself, who orchestrated the entire event. The second, an annual meeting attended by over 2,000 people, had an entire team, both volunteers and paid staff. A consulting company and media organization hosted the third. It was their second ‘expo’ but one of many they run every year, so it was really not a new venture.

The St. Kitts event had intense recruiting of the educational speakers and planning for the activities, the venue, the meals, and room gifts. It was flawless. Now that is not my opinion, but that of the attendees who completed their evaluation forms after they returned from the trip.

Nothing at the St. Kitts retread was left to chance. Every detail, from the website information prior to the event, to the meet and greet at the airport, the lavish food presentation awaiting in each carefully selected suite, the education content and the hosted activities made this three-day event truly remarkable.

The second event was lackluster, poorly executed and, at best, a networking event that had little focus or takeaway. While I am sure that the team was very involved in the planning process, they seemed to miss the execution. They did not employ zero-based thinking to chart an event embedded with possibilities, but depended almost entirely on ‘did it that way before’ concepts. They did not take us places where we have not been before in their themes, education, food, or entertainment. Every day was a flurry of activity, but marginally productive.

The Gaming Expo in Las Vegas, had better food than the second meeting, but much poorer education. Most of the keynote sessions had no handouts; the PowerPoint presentations were difficult at best to read, and the content hardly worthy of the $850 enrollment fee.

You have heard me say it before…Shift Happens! The St. Kitts event should have been the least exciting event, due to absolutely no budget. Based on the resources of both education and staff, the second meeting, in Atlanta should have been the winner. And from a targeted audience perspective, the education program in Las Vegas presented a missed opportunity to present ideas to change or refine an entire industry. What happened is representative of most organizations. They discourage innovation because too often the penalty for failure is greater than the reward for change. So why take any risks? There is no refinement of strengths but a default to weaknesses, because it is safe.

How one approaches things, their attitude, is critical, whether it is planning an event or running a business. In Atlanta, I stayed at the Hyatt Regency, and was upgraded to the Regency Club. Normally this would be a real treat. However, due to the size of the convention, they closed the regular Regency Club and relocated it to a meeting room some dozen floors below mine, which made it very inconvenient.

When I arrived at the relocated Regency Club, I had to present a photo ID, a room key and sign in. The offering was rather sparse and the room was sterile. It was not typical of Hyatt’s Regency Club, but more of a continental breakfast that was on a high carb diet.

That evening I returned and was pleasantly greeted by a young man, Cedric Tucker, who made that shift at the Hyatt Regency Club exceptional. He was warm, hospitable and made me welcome in ‘his house.’ He offered to create a sample plate for me, asked me to make myself comfortable, and checked on others and me throughout the evening. When I got up to clear my plate (guess McDonald’s has trained me) he quietly but firmly told me that guests don’t clear their plates in ‘his house.’

For me that was an exceptional experience of Southern hospitality, and a shining example of how attitude change a bad situation in to a positive, memorable one.. Similarly, while in St. Kitts. every contact with every person at the St. Kitts Marriott was gracious and friendly. It was clear they understood what the hospitality business was all about. Again, from those gestures alone I would return to that hotel.

The agent held up dozens of passengers while she supervised my moving those four pounds. What was most bothersome was that they told me I could have avoided this delay and embarrassment if I was willing to pay an additional $100. When I pointed out that I was entitled to a weight total and not per piece, not even the supervisor was unwilling to alter their demand.

Having the RIGHT ATTITUDE means you open your mind. When Alicia took over the event in St. Kitts, she had no prior experience in running events. But she opened her mind. She asked questions. She sought assistance. She asked attendees what they wanted and worked with the suppliers to deliver. She made some mistakes along the way, but she learned from them, corrected them, and the end result was a truly memorable event. We think it was so good, that we’ve entered the St. Kitts Retreat in an award competition.

Whether we win or not, Alicia learned that she could ‘stretch’ and not be penalized if she failed. As a reward I took her on the trip and invited her sister as well. She was recognized in front of the group, received some tangible rewards, and, more importantly, achieved success.