Shift Happens!® When you do the math.

When we are told to “think outside the box’ the problem is that our perspective is lost. We are outside of the problem and not immersed inside of it. Go “inside the box.” Move the components around.

Use simple math. Add, subtract, multiply, and divide up the parts to see if you can make something new. 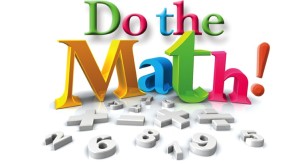 Look at some of the most innovative ideas from the past to create new ideas for the future. To stop thieves from stealing radios there were several choices. Every one of them was tried at one time or another. For many years you could remove the radio from the sliding drawer but more people lost their radios through misplacement than through theft. The biggest question was where you put the radio or how you carried it away from the car.

So innovative problem solvers looked at the problem. The tried another approach which created a new solution. If the faceplate was removed all the controls were disabled and the radio was useless. Now the part was small and easy to hide elsewhere in the car or carried.

The solution was that the radio has a code that is matched to the car. Once the signal no longer senses the code the radio no longer works. Simple to use because the components were ‘subtracted’ from the problem thereby rendering a workable solution. Today that problem no longer exists in the same way because the radios are not the same. First of all they have the ability to receive digital input from the airwaves, smartphones, etc. Second the radio is now an integral part of the navigation system and due to the ‘code’ can’t be used in another car if removed.

Simple arithmetic allows us some innovative problem solving without the introduction of new components or resources. For example, use addition to replicate components and add to the over all solution. How many tires on a car? How many in a set. Four? Five? Nope…two… a set is two yet most of us would say four or even five.  Two is all that is needed to make a car a hot rod or a truck a tractor. Simply change the rear tires and you have a new use for the same chassis. And when you buy snow tires they sell you two, not four or five. Rethink how you do the math. Sometimes it’s very simple, add, subtract, multiply, and divide and you will come up with the solution.

Remember the answer to most problems is found in the components that make up the problem.