What Would Jobs Do About Jobs? 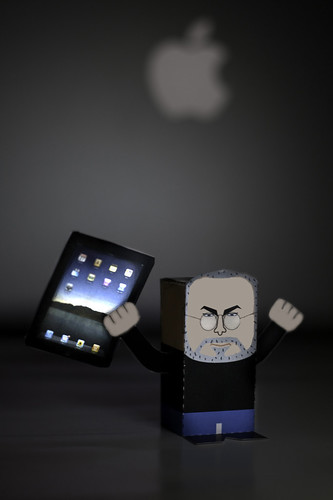 Recently Tim Cook, the new President of Apple introduced the new OS for the Iphone.

He is different than Steve Jobs. He is more corporate. He lacks Jobs’ showmanship.

I am reminded, again, how we have all been profoundly affected by the life and accomplishments of Steve Jobs, Co founder of Apple.

People that did not know him wept.
Articles spoke of his life, and passing with other great visionaries.
His life became the personification of how Shift Happens and more importantly how he put a ‘dent’ in the universe.

JOBS legacy is not reduced to a few dozen products but how those products, and his vision, changed the world.
He showed us that we could collaborate with talented people to invent our own future. But where are the jobs?

The ‘jobs’ that help nurture the Jobs of the future. In reading what has been said about JOBS I am struck by our dilemma. We are not creating jobs that nurture the next JOBS. A recent study by researchers at the University of California, Irvine, found that a third of students surveyed said that they expected B’s just for attending lectures, and 40 percent said they deserved a B for completing the required reading.

Aaron M. Brower, the vice provost for teaching and learning at the University of Wisconsin-Madison, offers a theory.

College students talk about wanting to be part of a different and better world, but they don’t won’t spend the time to learn how.

Elayne Clift, in The Chronicle of Higher Education (“From Students, A Misplaced Sense of Entitlement“), writes that: “Every college teacher I know is bemoaning the same kind of thing. Whether it’s rude behavior, lack of intellectual rigor, or both, we are all struggling with the same frightening decline in student performance and academic standards at institutions of higher learning. A sense of entitlement now pervades the academy, excellence be damned.”

As a result the new jobs, or lack of them, prevents finding the new JOBS. Those that have jobs are now ‘overemployed.’ They are expected to multi-task, work harder, but not necessarily work smarter. Commerce forces more from less. And with the new workers so poorly skilled in JOBS creation we are becoming a second rate country with unemployment at an all time high.

As an election year approaches we should evaluate legislators who are looking for places to cut higher education. We should take a look at the highly paid administrators who allow this system to persist. We need to apply the JOBS approach and find those who really care about learning. JOBS was involved in every detail. It was not just the product but also the packaging, the marketing, the ease of use, and the integration of technology with practical use. I am worried that we won create jobs that put a ‘dent’ in the universe. Whether it’s education or commerce we need to think like JOBS so we can create more jobs.