Look Inside the Railroad Car to Find Innovation – and Pasta Sauce

*An excerpt from my book, Shift Happens, No Job, No Money, Now What?* 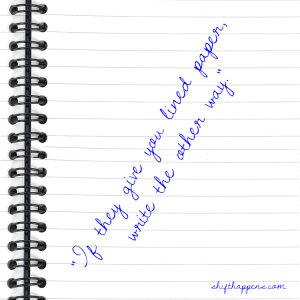 People have asked me, what is 3DThinking? The short answer is: a method to become an innovative problem solver using three principles. 1) Depth. 2) Distance. 3) Determination. Another important part of innovative problem solving and 3DThinking is taking the initial problem, breaking it down into components and trying to see if you can use existing components to help solve the problem more efficiently.

But the long answer is a little more entertaining.

Back when I was in law school, let’s just say a few..ahem…years ago. One of my law school associates was a part-time insurance claim adjuster. One Wednesday afternoon, he asked if I wanted to go with him to view a railroad boxcar that had been ‘found’ on a sidetrack at the Atchison, Topeka and Santa Fe Railroad yard.

He explained that the railroad boxcar had been declared ‘lost’ and the insurance company paid the claim to American Home Products. His assignment was to recover money for the sale of the ‘found’ product. We went to the railroad yard, cut the lock off the door and found a railroad car full of Chef Boyardee pasta sauce in #10 institutional cans.

Imagine a storage container 40 feet long, 14 feet high and 4.5 feet wide filled with pasta sauce. The First question I asked myself was, “how can I make money from this stuff?

It’s a lot of pasta sauce, but the price had to be worth the risk. I asked my friend what price would permit an immediate sale. $5000 was his instant reply. SOLD!

Now that I had made the offer I needed to come up with a way to pay for it, right? So I called my bank and told them what I wanted to do. They immediately bombarded me with questions like: “Have you lost your mind?” “What do you know about surplus food products?” “What are you going to do with it?”

I paid for the boxcar late Thursday afternoon. Now what to do?

Friday morning, my day started with a call from the railroad foreman for the Atchison, Topeka and Santa Fe Railroad.

“Are you James Feldman?” he asked. “Did you purchase railroad box car MDW1967?”

To be perfectly candid, the thought of moving the railroad boxcar had never occurred to me.

I told my story and apparently the foreman had the same reaction as my bank, “Are your crazy?”

I quickly learned that you need a permit, a locomotive, an engineer, a caboose, a conductor and easement rights to move the car across the various railroad lines.

Just like the bank, he was in disbelief. I am sure he thought I had lost my mind and needed serious help. After my formal pleading he agreed to delay the paperwork over the weekend because he was going out of town and wouldn’t return to work until Tuesday afternoon.

So now…I asked myself, “What am I going to do with thousands of gallons of pasta sauce and a railroad car?”

Now is where the 3DThinking principles kick in. Think about what you would do in the same situation. What is your 3DThinking plan?

What would you do with a railroad boxcar filled with pasta sauce? After discarding the traditional thinking about trying to find a customer that could use the sauce I started to make inquiries to my law study group. After all, these were bright people that were being trained to use the Socratic method of problem solving. It should come as no surprise to you that they did not come up with a solution that was any different than mine. After all we all applied the same logic to the problem solving.

It was very late Sunday evening. I knew that I had to come up with a way to get that railroad boxcar off the tracks at someone else’s expense. Who would want that amount of sauce…and a railroad boxcar?

Play the ‘what if’ game with me. Stop and write down what you would do? Apply 3DThinking. Ask yourself, what happens when you go deep into the problem? What questions can you ask? Follow the manufacturer to the freight car to the destination and ultimate consumer. Before you read further consider what you would do if you had just spent $5000 which you did not have, to purchase something you did not need, in a railroad boxcar that you could not move. And you think you have problems? Got an answer? Are you 3DThinking? Here’s a hint, the answer is in the story.

So maybe you have figured out the solution already, but let’s see how I used existing components to solve the railcar full of pasta sauce problem. Once I applied 3DThinking and tracked from the manufacturer to the end user I realized I was working in the wrong direction. I had begun by searching for the end-user or consumer and instead realized that if I could sell it back to the manufacturer for less than it costs them to produce it, then both my customer and I would win. And of course I could throw a railroad boxcar in the deal. In addition, if the manufacturer could sell it to one of their local customers they would also save on freight and production. Once I started to think about the flow of the product from the manufacturer to the consumer it became possible to repurpose the pasta sauce. Now it was just up to finding the right people.

I called the pasta sauce company’s purchasing department to find out the cost of production of the fl10 institutional sized cans of sauce. I was told that the information was confidential. I thought to myself what could be so secret? How can I find out what the product was worth if I didn’t know what it cost to make? Let me remind you, I could find out the wholesale cost to the distributor or the consumer because there were printed price lists, but what I really wanted was manufactured cost, so I could approach purchasing with a deal they could not refuse.

I phoned the headquarters and asked to speak to the product manager. A cheerful voice informed me that the product manager was unavailable but she would try to assist me. I told her I was a student (which was true) and I was doing some research on the cost of commodities from the manufacturer to the distributor to the consumer (which was also true). She asked why I needed this information and I told her it was a school project (sort of true). In a few minutes she gave me what I needed…manufactured cost. I then contacted purchasing, armed with the cost information and said that I had a railroad car full of their pasta sauce. I gave them the product code number and expiration date as well as the location of the railroad car. Within a few hours the company made me a very low offer, from their perspective, and I accepted a fabulous profit (from my perspective).

I sold the contents of the railroad car, as well as the railcar itself back to the pasta sauce company. In less than a week I made over 8 times my real investment. I did so well that I paid my friend, the insurance claims adjuster, a nice bonus and asked him to take me back to the railroad yard next time he had to ‘salvage’ another railroad boxcar, which he did. I also delivered a nice gift to the foreman of the railroad yard to ensure that he gave me a little extra time to move my ‘stuff.’ And that’s how I got into buying and selling railroad cars of ‘stuff.’ Over the next year I purchased three more railroad boxcars and made more money than most first year lawyers.

*An excerpt from my book, Shift Happens, No Job, No Money, Now What?*