Chicken of the Sea 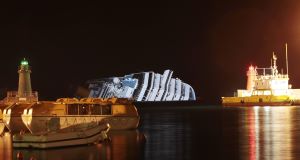 It continues to amaze me that we live in a world where on the same day, a firefighter; Tom Panzica risked his life to save a dog that fell into the ice covered pond, then Captain Francesco Schettino, the Costa Concordia captain at the center of one of Italy’s worst maritime disasters, abandons his ship.

Leaders communicate well. They don’t point fingers at others. They lead by example. Leaders are about action. Each of us has to make a decision that defines who we are and how we lead or follow.

These two examples permit us to value our own actions and either lead by example for others to follow or follow others. People generally love the hero and hate the coward. Schettino’s career is over. His name will become synonymous with being a chicken, a coward, etc. Panzica will become yesterday’s news but he knows what he did took courage and commitment. He saved an animal that was helpless. Schettino abandoned them.

Inspiration comes from perspiration. You can be a leader or a follower. No matter what choice you make others will evaluate your actions and determine whether to flee or follow.

Take a moment and reflect what you would do in those two situations. The dog, reportedly named Copper, was chasing geese when he ran out onto the pond, said the dog’s owner, then Panzica saved him. An unsung hero, perhaps, but maybe you will tell others while Francesco will never be able to face anyone without wondering if they know about his lack of leadership and courage. Each has a legacy. Each man made a choice. Each made SHIFT HAPPEN.

Just ask any mermaid you happen to see…who’s the Chicken of the Sea?